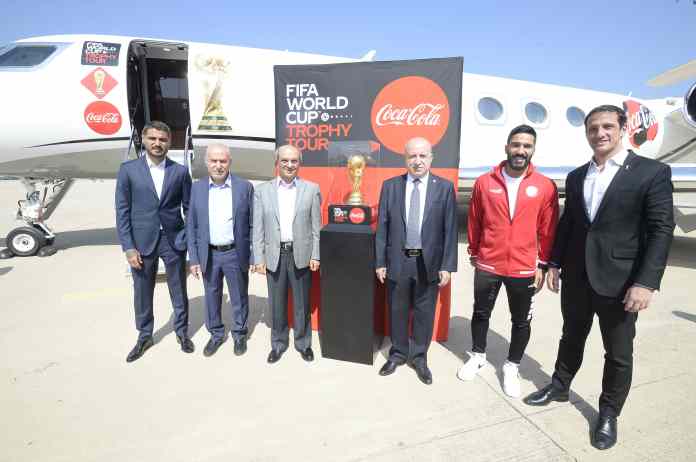 Beirut, Lebanon, June 5, 2022 – The FIFA World Cup™ Original Trophy today was unveiled in Lebanon for the first time ever during a VIP event, providing an exclusive experience of football’s most coveted prize as the fifth FIFA World Cup™ Trophy Tour by Coca-Cola continues its journey to 51 countries and territories.

Tolga Cebe, Vice President & General Manager Middle East, The Coca-Cola Company said: “We are excited to bring the FIFA World Cup™ Trophy Tour by Coca-Cola to Lebanon and several other countries in the region for the first time. By bringing the original FIFA World Cup™ Trophy, we hope to inspire a spirit of hope and optimism for a bright future for the youth of the country. We express our sincere thanks and gratitude to FIFA and the Lebanon Football Association for their partnership.”

Lebanon Football Association President, Hachem Haidar said: “For Lebanon, where football is the most popular sport, hosting the Original FIFA World Cup™ Trophy Tour by Coca-Cola is an opportunity and a source of inspiration for current players and especially the young ones – some who are with us today.  The FIFA World Cup is more than a football competition. It is an event that connects people, builds intercultural understandings and brings people of all ages, races and cultures together. We at the Lebanese Football Association aim to be at the forefront of embodying this vision and core values.”

The FIFA World Cup™ Trophy Tour by Coca-Cola will visit 51 countries and territories, bringing Coca-Cola and FIFA one step closer to visiting all 211 Football Nations by 2030. For the first time ever, the tour will visit all 32 FIFA World Cup™ qualifying countries, inspiring fans across the world through exclusive consumer experiences.

Belletti said: “It is such an honor to be here in Lebanon. Lifting the Original FIFA World Cup™ Trophy has the power to excite millions of fans and, after witnessing the Middle East’s passion for football first-hand, I know the Tour will continue excite and engage with fans across the region.”

The FIFA World CupTM Trophy Tour by Coca-Cola began its journey from the UAE on 12 May and then travelled to Oman, Kuwait and Bahrain prior to visiting Lebanon. The Tour will also visit Saudi Arabia as the penultimate stop ahead of its final destination in host country Qatar later this year.

About The Coca-Cola Company

The Coca-Cola Company (NYSE: KO) is a total beverage company with products sold in more than 200 countries and territories. Our company’s purpose is to refresh the world and make a difference. We sell multiple billion-dollar brands across several beverage categories worldwide.

About the FIFA World Cup™ Trophy