Home On the front page “Kermalak Ya Watan” From Lebanon to the world … A thousand thanks...
Facebook
Twitter
WhatsApp
Telegram
Linkedin
Email
Print 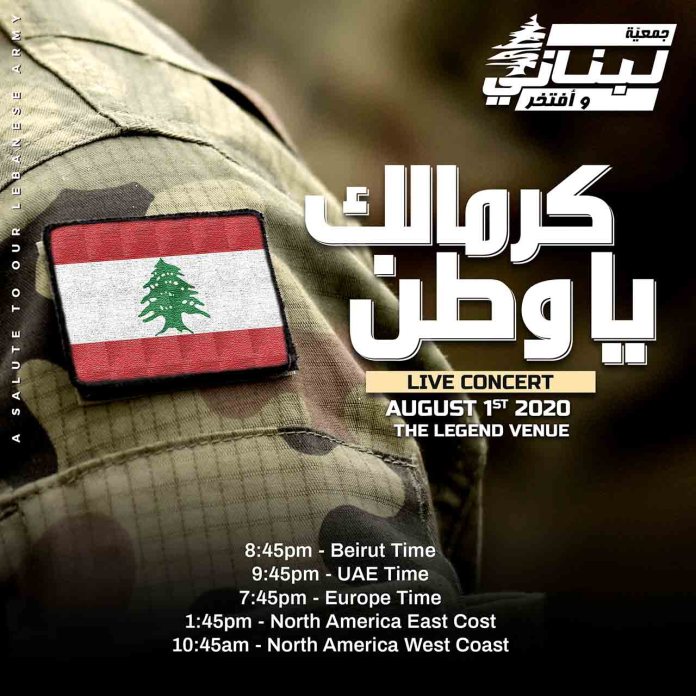 Today, Lebanon is in pain, and its pain has reached all corners of its land and went beyond borders reaching its sons abroad, so they felt a national duty and they are making strenuous efforts to save their beloved country. To alleviate the pain that has reached them, and in celebration of an institution that shed blood for the country, the NGO “Lebanese and Proud” decided to honor the Lebanese Army on the 75th anniversary of its founding on August 1, 2020 during a concert without audience at 8:45 pm Beirut time under the patronage of the Lebanese Army Commander General Joseph Aoun. The concert will be broadcasted live on all local channels, as it will bring the feelings of honor and pride of this institution, to all expatriates eager to feel patriotism and peace again.

“Kermalak ya Watan” is a virtual celebration of the 75th anniversary of the Lebanese Army Forces organized by the NGO Lebanese & Proud, whose aim is to support governmental institutions, and executed by ICE International Events, held at the Legend Venue Naher El-Kaleb with no audiences.

The celebration will include a variety of music, songs, reports, dance performance and a magnificent visual show showcasing the milestones and emblems of the honorable institution. The show will feature the singers Assi Al-Hallani, Joseph Attieh, Ramy Ayach, Ghassan Saliba, Melhem Zain (alphabetical order) and the poet Nizar Francis who offered their performances for their love to the Army. In addition the composer Michel Fadel will orchestrate a musical piece performed by 50 musicians and 30 choir members. Dance also will pay tribute to the Army with a magical performance by Nadim Cherfane, known for choreographing the group Mayyas.

With everything happening in Lebanon, “Kermalak Ya Watan” will add a glimpse of positivity amidst the negativity surrounding the people, and lift their spirits in celebration to the saviors of this country and its protectors.