Martyrs’ Square for some, Place des Canons for others, Beirut’s main square. It now bears this name in memory of the Lebanese nationalists hanged by the Ottomans on May 6, 1916. Its name has changed with the times.

The site of the first fortress built by Emir Fakhr al-Din, hence its first name, Place de la Tour, it became, under the leadership of Ottoman Governor Djezzar Pasha, the Place des Canons following the development of defensive structures. Divided by the 1975 civil war, it also reunited the Lebanese without his knowledge.

These places have always had a special place in Lebanon, a place of gathering beyond community affiliations, a symbolic place where the Lebanese descend to demonstrate.

Like these bullet-riddled martyrs, it remains today a plague in the city as many say, a place where the development has not yet been carried out despite the 26 years that separate us from the end of the civil war.

Among the oldest video recordings in the world, that of Beirut, this scale of the Levant is prominently featured. Shot just one year after the invention of cinema by the Lumières Brothers, this recording is the work of Jean Alexandre Louis Promio, born on July 9, 1868 in Lyon and died on December 24, 1926 in Asnières-sur-Seine, operator of animated photographic views, as they were called at the time.

He toured the world, at the request of the Lumière Brothers, between June 1896 and September 1897 to feed the catalogue of animated photographic views of this house.

Beirut, filming location of one of the world’s oldest animated recordings

Promio’s stopover in Beirut, the first animated scenes of the Place des Canons

At one of his stops, he went down to Beirut to film the life of the Place des Canons, as he was called at that time, with the Maronite Cathedral st. Georges and the famous Ahwat al Izaz, built on the site of the Great Mosque of Beirut. In the foreground, the pass of pedestrians and horse-drawn carriages.

One would imagine seeing the famous Abu Abed, a figure that has become almost legendary places but which actually existed, pass in front of the lens and be immortalized on this film.

Among the other countries visited, Spain first, then Algeria, Panama. After Beirut, Alexander Promio also visited Egypt in 1897 and Jerusalem.

The soundtrack of this film was recently restored by the French Film Archives of the CNC and is available at the CNC at the BnF (Paris); Bois d’Arcy (Yvelines). 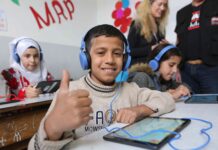 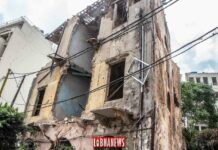