Citerne Beirut, the all-new creative and artistic space, has launched its program for the month of May, in a capital thirsty for performing and visual arts. The platform hosts an array of local and international artists who come to perform musical evenings, contemporary dance shows, exhibitions and workshops.

“After the dazzling success of BIPOD 2019, we are delighted to host local and international artists, from the fields of art, music and dance, and to present works of art that have social and cultural dimensions. We have great confidence in the Lebanese public, which has accompanied the festival intensively this year and is eager for new and distinctive ideas,” said Omar Rajeh, founder of Maqamat.

In her turn Mia Habis said: “The performances and activities presented in the month of May are a proof that Citerne Beirut has put in motion its plan to produce and present contemporary local and international works, including dance, music, theater and other types of arts; it is a true home to culture and a space that reflects the ideas and relationship of the city and its people.”

The May program includes a wide variety of artistic and cultural activities. It was launched on May 8 with a workshop and residency program for the Japanese artist, currently residing in Austria, Michikazu Matsune, who looks through his work for the individual identity somewhere beyond the confines of regional affiliations and narrow categories in our globalized world. The workshop runs until May 10.

The program resumes with a performance by Ghida Hachicho, on May 14 and 15, produced by Citerne Beirut and titled “Beyond a certain point, Movement itself changes.”

On the evening of May 17 and 18, dancers Mitra Ziaee Kia and Hiva Sedaghat, from Iran, will perform in a visual and physical show titled “Azi Dahaka”, a name inspired by ancient Persian legends.

For the lovers of music, a special concert will be held on the evening of May 21 with the innovative composer, guitarist and oud player, Lebanese-born artist Mahmoud Turkmani, who comes from Switzerland where he works as a teacher of classical guitar and oud at the Conservatory of Berne, to perform “Abyad/Aswad” that is a milestone in his distinguished career. Turkmani has composed works for well-known artists and ensembles such as Keyvan Chemirani, Patricia Kopatchinskaya, Conrad Steinmann, Mariano Martin, Matthias Ziegler, the Berne Symphony Orchestra and the Cairo Symphony Orchestra.

On Friday evening, May 24, Citerne Beirut offers dance lovers a unique opportunity to meet the Belgian contemporary dance and performance company “Voetvolk”, led by choreographer Lisbeth Gruwez and composer Maarten Van Cauwenberghe. A performance, sponsored by Boghossian Foundation and titled “It’s Going to Get Worse and Worse and Worse, My Friend,” reflects the effectiveness of speech in influencing the audience. Initially, the parlance is friendly and pacifying, but from the compulsive desire to persuade transpires growing despair. Eventually, both the speaker and the listener enter in a state of coma, which Lisbeth expresses through her professional dance performance.

On May 27, Oud player Oussama Abdel Fattah presents a musical concert titled “Phonograph and Tea”. A pleasant journey of research and art with a narrative and audio spirit for classical pieces of Arabic music.

Finally, the closing night on May 30 will be with “Safar”, composed by the Lebanese duo Elie Abdelnour (electric guitar) and Mayssa Jallad (vocals). A fantastic night not to be missed!

All performances will be held at “Citerne Beirut”, Armenia Street, El Nahr (end of Mar Mikhail).

The full program is available on: http://bit.ly/CiterneMay19

Tickets are available in Librairie Antoine Branches and on: www.antoineticketing.com 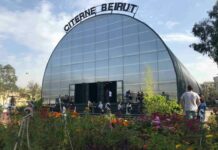 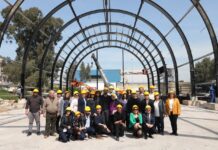