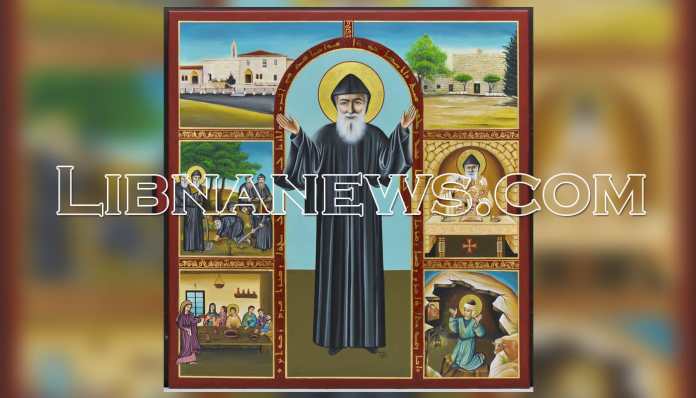 Whenever the name of the Lebanese Saint of Beqaakafra is mentioned or invoked, it goes without saying, for all those who know this figure from near or far, to have in mind the image of the monk of the Order. Lebanese Maronite in full meditation, with closed eyes. Against a greenish background, dressed all in black, in shades of earth and ocher, this old man who loved his Lebanon and his sons so much, never stops working miracle after miracle and watching over his cedar seeds.

Today, when crossing the threshold of the Saint-Maroun monastery in Annaya, a new presence welcomes visitors, discreetly but prodigiously, on one of the walls adjoining the old church: The icon of Saint Charbel.

A new icon, the first to be adopted by the monks of the Monastery, for what it carries with it elements consistent with the meaning and history of the Saint, with respect for Eastern and local tradition. It is useful to remember that an icon is not a simple work of art; it is a pictorial source carrying spirituality, a visual theology, a catechesis through the image. It is at the same time a mediation between God and the human being, a meeting place, a bridge between the faithful and God.

This new icon of Saint Charbel in a praying position is framed with scenes from his life, from his childhood until his death in the odor of holiness. Key and significant moments represented in accordance with iconographic canons, and while respecting the story of his life, the iconographic tradition, as well as our Syro-Maronite and Lebanese heritage.

A communion of gaze between the Saint and the faithful

According to a tradition firmly defined since the beginning of Christianity, iconographic figures always have their eyes open. In an icon, the Saint cannot close his eyes when he is in the presence of God, nor when a faithful addresses him. Saint Charbel in glory at the heart of the composition, the serene face, opens his eyes to mark his face to Face with his Lord. A particular dynamic is conferred on this iconographic face by the eyes calling out to the faithful speaking to him, underlining his attentive presence to the prayers addressed to him, until becoming communion between him and the faithful.

It is through this communion of the gaze, that the invocations are perceived and made concrete, and that the miracle occurs. Saint Charbel seems to smile slightly, thus revealing the beatitude of his spirit to his Creator.

Under the brush of Pascale El Corm

Thus, under the brush of the Lebanese iconographer Pascale El Corm, from the artistic branch of the Corm de Ghosta, the Lebanese Saint opened his eyes, in a composition marrying bright colors with terrestrial and celestial colors. After eight months of meditation, sketches and historical, anatomical and artistic research, El Corm succeeded in writing the icon summarizing the life, portrait and spirituality of the Lebanese Saint.

Animated by a particular fervor that she devotes to Mar Charbel, she is certain that the result obtained is the fruit of daily prayer and of the Saint’s will to appear in these traits to the viewer. Chance, which is the nickname of Providence, wanted the final touch to be placed on May 8, 2016, the day commemorating the birth of little Charbel Makhlouf.

Pascale El Corm, holder of a DEA in Sacred Art from USEK, has made icons and paintings since 1998, present in places of worship or in private homes all over the world: Lebanon, Syria, Cyprus, Italy, Vatican, Mexico, United States, Africa, Australia, etc. She also teaches iconography at USEK.

A small booklet will be available soon at the monastery, offering a historical and iconographic explanation as well as a symbolic and chronological reading of the icon. It is necessary to remember that this new icon in no way cancels the current portrait of the Saint, but it puts an end to the various attempts wrongly designated by “icon of Saint Charbel” since they do not observe the iconographic canons. We now have a holy image representing the symbolic portrait of Saint Charbel with closed eyes, alongside an icon of Saint Charbel in glory surrounded by scenes from his life.