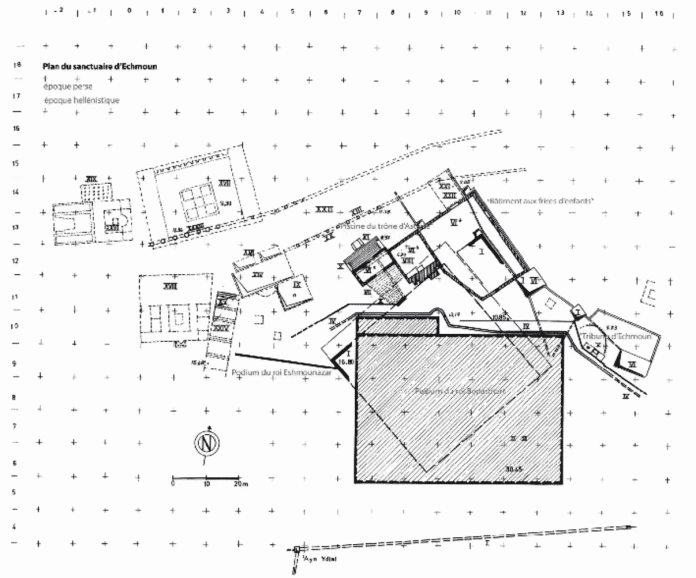 Temple dedicated to the god Phoenician Eshmoun healing, it is located barely one kilometer from the city of Saïda in southern Lebanon.

It is now inscribed on the UNESCO World Heritage Tentative List because of its archaeological importance.

Originally, a young hunter from Qabr Chmoun near what would become Beirut and with whom Astarté had fallen madly in love, Eshmoun had to mutilate herself to escape the Goddess. However, he will die of it.
Astarté will then bring him back to life.
This story therefore recalls that of the legend of Adonis.

He will be assimilated to Asclepius among the Greeks and Aesculapius among the Romans. Even today, Echmoun remains an important symbol of Medicine. Indeed, it is his caduceus that is still used as a symbol: it is the two snakes wrapped around a stick.

At the origin of this symbol widely used today as a symbol of physicians, a gold plaque found near the temple of Echmoun where the goddess of health, Hygieia, and the god Echmoun holding in the right hand are represented. a stick around which a snake is wrapped.

The Importance of the Temple of Eshmoun in Saïda

Echmoun will also become the Patron of the Phoenician city of Saïda which will organize an important pilgrimage to its proximity. The choice of the site would be motivated by the existence of the Al Awali river which flows nearby and a source used for ritual baths.

It was during the reign of the king of Sidon Eshmounazar II – whose sarcophagus is now in the Louvre Museum – during the Achaemenid period that the construction of this temple will begin.

The site was then the subject of numerous alterations and additions between the end of the 7th century BC. until the 7th – 8th century AD.
There are thus different styles, ranging from Persian, Greek, Hellenic or even Roman influence.

The temple was not discovered until 1900 by treasure looters. Soon, official excavations will be put in place to preserve the new discovery.

It was then that Maurice Dunand, a French archaeologist who also looked after the archaeological site of Byblos, thoroughly excavated the site from 1963 until the start of the Lebanon War in 1975.

The artifacts of the Temple of Echmoun will still have to undergo their batches of theft. Thus, while part of his collections had been made safe in Byblos by the director of the DGA Maurice Chéhab , because of its proximity to the Palestinian camps and the high probability of thefts from the site itself, 600 of these pieces, which were stored there, will be stolen in 1981 and resold on the black market. Only 9 of them have since been found in 2009 and have been returned to Lebanon. 4 of them are exhibited at the National Museum after being repatriated from the United States in 2018.

The site is now in poor condition and has in addition to the podium and the temple itself, mosaics and cisterns that were used for ritual baths.

Among the remarkable elements still in place, a series of Roman columns from the 3rd century AD, built by Emperor Septimius Severus.

It was at the time of Paleo-Christianity that the site gradually fell into oblivion. Its stones will be used first to repair structures damaged by an earthquake in 570 AD.
The worship of Echmoun will even be prohibited then during the paganist persecution while the Roman Empire died out. However, the temple will not be devastated like the temple of Astarte from Afqa .

Then a Byzantine church, located nearby, will reuse some of its materials. It is the mosaics of this church that we can see on the spot.

This practice of reusing materials will last until the 17th century, with the reuse of stones for the construction of a bridge during the rule of Emir Fahr al Din II who wanted to make the city of Saïda its economic capital.

The tribune or the Podium of the temple of Echmoun

In the temple of Echmoun, was also found a Monumental Podium composed of a monolithic block of marble originating in Greece and today kept at the National Museum of Beirut. It was set up by King Echmounazar II during the 5th century BC and while Saïda was under Achaemenid influence.

According to archaeological studies carried out, however, it will be enlarged by King Bodashtart.

The Greek gods appear on the many bas-reliefs on each side. The figures seem to have been vandalized on the faces in particular.

More information on this subject

A new monument of Greek art in Phenicia: the “tribune” of the sanctuary of Echmoun in Sidon

The thrones of Astarte from the National Museum

Found at the temple of Echmoun and now on display at the National Museum of Beirut, the thrones of Astarte are generally dated to the Persian, Hellenistic and Roman eras. The goddess is represented by her animal attributes such as the winged sphinxes, the palmette or even a betyl or a stone symbolizing the divinity.

Now on display in the Beirut Museum, the votive offerings were originally found in the Temple of Eshmoun.

11 of them were found there.

As in Byblos, where many anchor-shaped votive offerings have been found, the cult of Echmoun was this time mainly devoted to the cure of childhood illnesses.
Thus, it was customary to offer the god statuettes in marble, an expensive material imported from Greece and in which appear the names of children whose parents sought healing.

Greek marble in Phenicia. The rise and fall of Sidon in the Persian and Hellenistic periods

Among the other finds at the scene, an anthropoid sarcophagus in black Amphibolite which today finds at the Louvres Museum . It would be that of its first builder, King Echmounazar II, where many inscriptions are located. 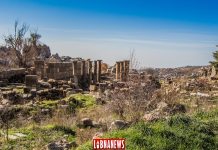 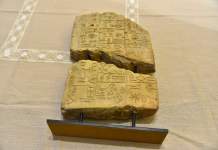 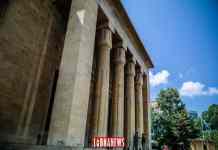 REGULATION on Antiquities, Order No. 166 LR of November 7, 1933 relating to antiques regulations

Lebanon / Heritage: The thrones of Astarte from the National Museum

Lebanon / Heritage: The tribune or the Podium of the temple of Echmoun