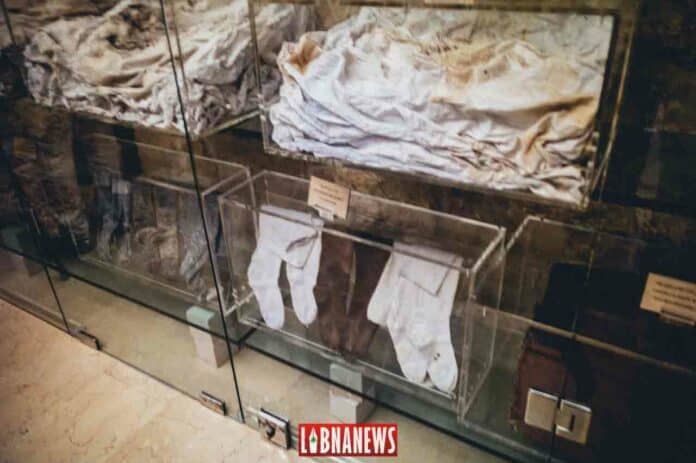 Born in Himlaya, in the northern Metn on June 29, 1832, her father was Mourad Saber el-Chobok el-Rayess and her mother Rafqa Gemayel. She lost her mother when she was only 7 years old, and in 1843 her father sent her to serve as an aide to Damascus with Assad Badawi, a person from Mount Lebanon.

She did not return until 1847, noting that in her absence her father had remarried. His aunt then considered leaving her to marry her cousin, while her mother-in-law wanted to unite her with her brother.

Faced with these situations, being already very religious, the woman who would become Saint Rafqa decided to start a religious career, first with the Congregation of the Virgin Mary between 1859 and 1871, also called Mariamettes, recently founded by Father Joseph Gemayel, despite her father’s opposition.

While she was at Our Lady of the Deliverance of Bikfaya to become a sister, accompanied by two other women, she heard a call to her vocation. Just entered the church, she felt a deep joy and heard the voice of God: “You will become a sister”.

She will resist various attempts to bring her back to the family home.

She will study Arabic, calligraphy and calculus. During her stay, the future Saint will also be sent on evangelization missions to Deir el Qamar where she will teach catechism to young villagers in the region. It was precisely during this period that massacres against Christians were committed by the Druze. Witnessing these massacres, she manages to save a child from the massacres committed by hiding him under his clothes.

Then, on March 19, 1861, she became a novice before presenting her vows on March 19, 1862, to the Monastery of Ghazir, then managed by the Jesuits. She was first appointed as a cook before becoming a teacher, and as early as 1863, and being transferred to a girls’ school in the Byblos area.

A year later, a year later, in 1864, Saint Rafqa arrived in Maad, still in the Byblos region, at the request of Antoun Issa, she founded a school with another nun for 7 years.

After the dissolution of her congregation in 1871, calling God to advise her, St. Rafqa had a vision during a dream with the presence of St. George, St. Simon, and St. Anthony the Great, advising her to become a nun with the Order of Maronite Monks,

It was with the help of Antoun Issa that she was accepted into the Convent of Saint Simon al-Qarn in the town of Aito in northern Lebanon. She returned to the novice on July 12, 1871, presented her vows on August 25, 1872, and adopted the name Rafqa, named after her mother.

In October 1885, according to the accounts of that time, she asked God to feel divine pain. That’s when she will feel immense pain in her head and eyes. The various treatments will fail and Saint Rafqa will be sent to Beirut for treatment.
On her way, she will pass St. John Mark’s Cathedral in Byblos where she will meet an American practitioner. He will mistakenly remove her eye in an attempt to heal her.

His pain, however, will spread to the left eye.

After many years, in 1897, the Lebanese Maronite Order decided to build a new convent – the convent of St Joseph – in Jrabta, not far from that of Kfifane, in the heights of Batroun. It is in the company of 6 other sisters and led by Sister Ursula Doumit that Saint Rafqa will be among the founders

Saint Rafqa died on March 23, 1914, and will be buried in the cemetery of the Monastery she founded.

Buried in the cemetery of St. Joseph-Jrabta Monastery, a light described by witnesses as “splendid” appeared on his tomb for two consecutive nights.

On July 10, 1927, his remains were transferred to another grave near the church.

It is celebrated every March 23.